5 COMPLICATIONS OF DIABETES THAT YOU SHOULD KNOW ABOUT

5 COMPLICATIONS OF DIABETES THAT YOU SHOULD KNOW ABOUT!

There has been a lot of talk about diabetes in the past few years more-so than ever before, and that’s because the numbers of affected individuals are skyrocketing, not only in America but all over the world. This Is largely because people have stopped taking their health seriously.

If you think that you’re not living a healthy lifestyle then talk to your doctor and begin making small lifestyle changes today to prevent diabetes altogether! Another great way to get expert medical advice is through an online doctor app. It’s a quick and convenient way to avail online health services from healthcare professionals without having to go the doctor’s office.

Before we get into the details, let’s go over the basics of diabetes.

When your body doesn’t regulate glucose or blood sugar the way it’s supposed to resulting in increased levels of glucose in the blood, this condition is referred to as diabetes. Normally, the pancreas secretes insulin that regulates glucose levels, especially after a meal. Glucose is taken up the cells of the body and used for energy.

In diabetes, theirs is either little or no insulin production, hence the glucose remains in the blood instead of inside the cells where it’s supposed to be.

There most common types of diabetes are Type 1 and Type 2.

What is diabetes type 1?

Type 1 DM is also called juvenile diabetes because it typically begins in childhood. In T1DM, the insulin producing cells of the pancreas are destroyed by the body’s own cells, also known as an autoimmune process.

Studies suggest that there are certain genes responsible for causing T1DM along with other environmental triggers. Yep, your own body goes against you, if you’re lucky enough to be genetically susceptible. Just to be politically correct.

It ultimately results in high blood sugar levels. The real bummer is that it is an insulin-dependent condition, which means that daily insulin shots is the only way to manage it effectively.

What is diabetes type 2

Type 2 DM differs from Type 1 because,

a) it’s not insulin dependent

b) it typically begins in adulthood, though can occur at any age

c) the pancreas does produce insulin, but the cells become resistant to it, a phenomenon known as insulin resistance resulting in hyperglycemia or raised blood sugar levels.

There are many factors involved in the development of diabetes such as:

For more information about the causes and risk factors of diabetes book a tele appointment with doctor online with an online doctor app called My live doctors. Download it on your smartphone for FREE, register online and look up your doctor right away! 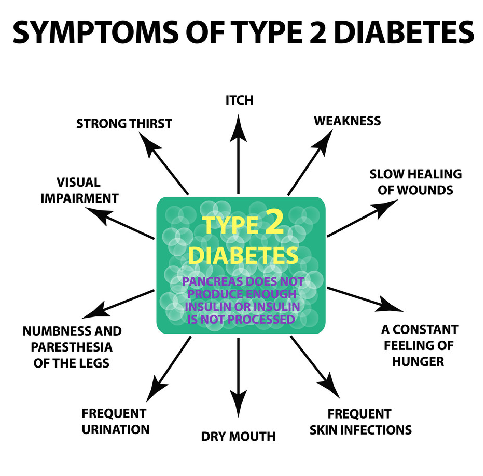 Signs and symptoms of diabetes

The most common diabetes signs include:

Long-standing diabetes can lead to a number of complications. Here are 5 of the most important ones that you should know about.

When you begin to develop stomach problems more frequently, it may be due to diabetes. Stomach contractility begins to slow down, muscle tone is affected and overall it becomes extremely sensitive and leads to:

It is the result of poor glycemic control. Your doctor may advise endoscopy to rule out other conditions with similar symptoms.

If you begin to feel a tingling sensation in your hands and feet it may be one of the effects of hyperglycemia i.e. nerve damage. It may give you a ‘pins and needles’ like feeling on the extremities, often exhibiting a glove and stocking distribution. Patients may describe it as discomfort or burning as well.

Chronic diabetes can damage the blood vessels that supply the retina (light-sensitive tissue responsible for vision) situated at the back of the eye. According to the National Eye Institute, it is the most common cause of vision loss among diabetics and the leading cause of vision impairment and blindness among working-age adults! That’s a huge life adjustment for anyone! Signs and symptoms are usually progressive in nature:

One of the major organs affected by diabetes is the kidney. It ends up becoming a long-term kidney disease caused by long-standing diabetes. It can even lead to end stage kidney disease or kidney failure! Symptoms include:

As the name indicates, it’s a very common condition in which there is accumulation of excess fat in the liver of people who consume no or little to none alcohol. Diabetes is one the causes of a fatty liver. Liver function may be compromised and symptoms may manifest as:

How to reverse diabetes?

Thankfully, the treatment of diabetes can in fact reverse the condition. Besides oral hypoglycemic agents and insulin, it really depends on how you treat your body and change your lifestyle for the better.

These treatment modalities will only help delay the progression of disease and are of little use if you don’t step up to the plate and work for a healthier lifestyle.

You will have to make different choices now, to not only improve your symptoms but get rid of them completely! Studies show that patients have gotten off their meds and insulin (in T2DM) just by losing weight! In addition to that, you should:

Find doctors online and discuss the best diabetes diet with them to help you live a healthier and happier life. To consult with a top-notch diabetologist, go to www.mylivedoctors.com and book an online appointment today!