‘Unless you puke, faint or die, keep going!’  Or find doctors online to help you! Throwing up can catch you off guard and weaken you in the moment, so much so that it’s likened to losing consciousness or death. Also known as emesis, vomiting refers to the process of involuntary and forceful expulsion of gastric (stomach) contents through the mouth and sometimes nose. Sometimes you ‘don’t feel too good’ or ‘feel like vomiting, but nothing comes out’ before you actually throw up, a symptom strongly associated with vomiting known as nausea.

Vomiting is a symptom that is common to most illnesses and occurs in various conditions such as, pregnancy and migraines. Find best doctors online with a doctor availability app to diagnose the cause of vomiting. Online medicine services are quick, convenient and cheaper too!

Vomiting should not be confused with regurgitation or acid reflux (as it often is) in which there is a backflow of undigested food from the stomach, up the esophagus and into the mouth minus the force and discomfort associated with vomiting. Self-induced vomiting is exercised by individuals that suffer from eating disorders such as, anorexia nervosa and bulimia.

Why do we vomit and what causes it?

Some experts say that vomiting is a protective mechanism of the body. It is a reflex that is prompted by various stimuli that trigger the vomiting center of the brain. The brain then sends signals back to the organs that set the reflex in action. There are chemicals in the brain known as neurotransmitters such as dopamine, histamine and serotonin that regulate the vomiting cycle.

A recent study suggests that nausea and vomiting may have protective effects during pregnancy against adverse fetal outcomes. The effects of nausea and vomiting of pregnancy (NVP) was examined on rates of miscarriage, intrauterine growth restriction, congenital malformations, prematurity and developmental achievements. It was concluded that the protective effect of NVP was more prominent in women with mild or moderate vomiting, compared to those with little or none.

However, throwing up isn’t always this good-natured. Here are other possible causes of vomiting:

When your vomit is green, it is usually suggestive of throwing up bile. Bile is a green colored digestive fluid that is produced by the liver and stored in the gallbladder. Bile may occur in vomitus on an empty stomach or in bile reflux. Bile reflux may cause abdominal pain, frequent heartburn, vomiting, nausea and an infrequent cough, hence the condition is often confused with ‘heartburn’. Vomiting bile can damage and cause distress to the lining of the stomach and esophagus. Bile reflux can also cause yellow vomit as well.

For expert medical advice find doctors online at www.mylivedoctors.com and discuss your health concerns with them. Or you can download the doctor availability app Mylivedoctors on your smartphone for FREE and avail an online medical consultation from the comfort of your own home!

Can vomiting be dangerous?

The most obvious complication of vomiting is dehydration. Vomiting doesn’t only expel food, but fluids as well. The signs of dehydration become evident in individuals who suffer from persistent vomiting. Vomiting may lead to following complications:

Malnutrition is also a complication of vomiting that results from the inability to keep down solid food causing the body to lose out on nutrients. Prolonged illnesses and pre-existing conditions can lead to this state. Such cases may require hospital admission and administration of nutrients via intravenous injections.

If you feel like your condition is not improving and you are experiencing any of the above symptoms, contact your primary healthcare physician or find doctors online and share your concerns.

How to treat vomiting?

The first step of management depends on the underlying cause. Occasional vomiting requires little or no intervention, except hydration of course. Whatever the cause, staying hydrated is the most important element of treatment. Other treatment strategies include:

The nature, duration and intensity of vomiting really depend on the cause and associated medical conditions. However certain triggers of vomiting can be avoided by adopting a healthier lifestyle. Examples of such stimuli are: 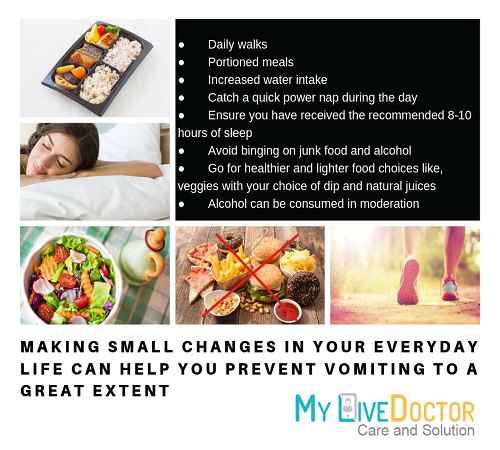 Is there any way to prevent vomiting?

Making small changes in your everyday life can help you prevent vomiting to a great extent:

Anything in excess can disturb the natural equilibrium of your body. ‘Health is wealth’ so be mindful of your body and take care of it. It’s the only place, you have to live!