THE DIABETIC DIET THAT WILL NORMALIZE YOUR BLOOD SUGAR LEVELS!

THE DIABETIC DIET THAT WILL NORMALIZE YOUR BLOOD SUGAR LEVELS!

Diabetes is one of the most common chronic health conditions today. It’s always making headlines in the field of medicine in terms of new studies and research. With ongoing developments in treatment and changing guidelines it can be confusing to keep up. Particularly if you’re not regular for your follow-up visits to the doctor. However, not much has changed when it comes to diet. How much sugar is too much sugar? How many fruits a day can you have? Should you eliminate carbs entirely? Are artificial sweeteners safe, and the list goes on.

According to the American Diabetes Association, in 2015, 30.3 million Americans, or 9.4% of the population, had diabetes. This is stark in comparison with a report released this year by the CDC which states that over 100 million US adults are now living with diabetes or pre-diabetes. These figures impose an increasing burden on overall morbidity and diabetes related death.

They say the word ‘disease’ is a misfit or misnomer for diabetes. Diabetes is more of a lifestyle. Small changes in your eating habits can go a long way in controlling blood sugar levels. Let’s go over some basic dos’ and don’ts when it comes to the types of food you put on your plate.

What are the different types of diabetes?

There three main types of diabetes:

Type 1 is an autoimmune condition in which the insulin producing cells of the pancreas are destroyed by the body’s own cells. This prevents the body from using insulin for glucose metabolism therefore resulting in elevated blood sugar levels. It is also referred to as ‘insulin-dependent’ diabetes. Due to the lack of insulin in the body it must be treated by insulin injections.

Type 2 is a metabolic condition in which the pancreas produces insulin but the body’s cells are unable to use the insulin for proper uptake of glucose, a phenomenon known as ‘insulin resistance’. This results in high blood glucose levels, which if remain uncontrolled could lead to organ damage. This is the most common type of diabetes.

This diabetes type occurs during pregnancy (as the name indicates) causing high blood glucose levels during pregnancy that typically return to normal after the baby is born. Women with gestational diabetes are more prone to develop type II diabetes some time later in life. 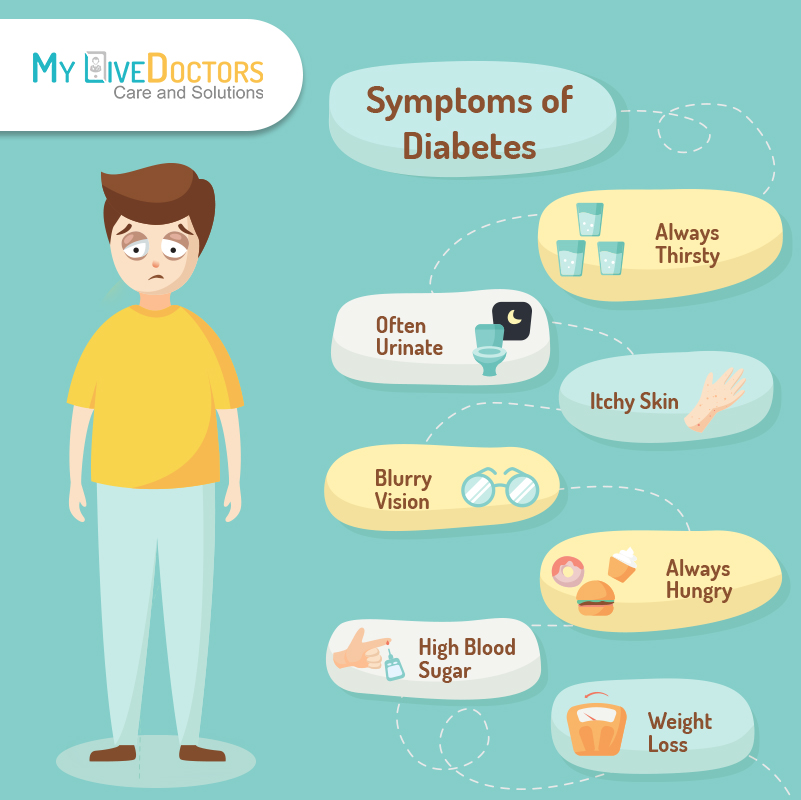 How do you know if you have diabetes?

The only way to be certain is by getting evaluated by your physician. Certain tests such as HbA1c, fasting and random blood glucose can indicate underlying diabetes. However, there are a few symptoms (common to diabetes) that you can look out for.

The fist warning signs of diabetes are:

The early symptoms of diabetes result from a persistently raised glucose level or a pre-diabetic phase. Glucose levels are borderline in the pre-diabetic stage. According to the American Diabetes Association, blood glucose levels should be between 70 and 130 mg/dl before meals, and less than 180 mg/dl two hours after starting a meal, with a glycated hemoglobin (A1C) level less than 7 percent. Sometimes, the initial signs and symptoms can be so mild that you may fail to recognize them. Others are usually diagnosed coincidentally during routine medical follow-ups. 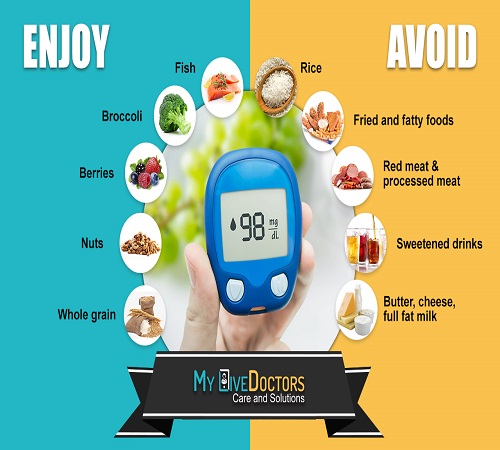 How do you manage diabetes?

It can be an overwhelming to be diagnosed with diabetes, especially for a young individual. Administration of medicines and insulin (in the later stages) can be used to control blood glucose levels, but a recent research study suggests that a low-calorie diet can reverse type 2 diabetes, even six years into the disease!

Losing weight and adopting a more active lifestyle can allow you to live a symptom free, safe and healthy life. Newcastle and Glasgow Universities conducted a trial in which 9 out of 10 patients who lost 15 kg or more put their disease into remission.

Which foods not to eat

Some foods lie in the grey area. For instance, coffee lovers often worry about caffeine consumption. Coffee and diabetes can play together in a safe zone as long as it is taken in moderation without any added sugar or creamers. Some research studies link the magnesium in coffee to reduced sugar levels. However, other research suggests that caffeinated or decaffeinated coffee may increase the risk of developing diabetes by causing increased blood sugar levels and insulin resistance.

What are the best foods for diabetes?

Fortunately, there are more options of foods that you can eat than those you can’t. They’re delicious and will not only boost your energy levels but make you feel healthier than ever before!

Hope this has helped you map out a strategy for the management of diabetes with a healthier and diabetic friendly diet. If you have any more questions or concerns regarding diabetes, its symptoms and management, talk to an expert online doctor at www.mylivedoctors.com or download MyLiveDoctors, an app to find a doctor on your smartphone for FREE! Look up your doctor and book an tele appointment with doctor and get a prescription online too. Chronic conditions like diabetes can easily be monitored from the comfort of your own home through an online medical consultation. Why wait hours for an appointment when you can get expert medical advice online.